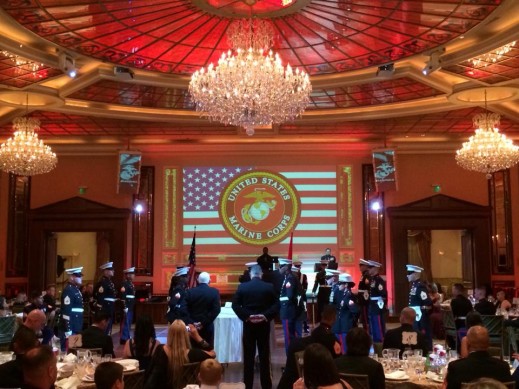 Each year on November 10th, the United States Marine Corps celebrates the anniversary of its founding and honors servicemen with a traditional “Marine Corps Birthday Ball” and cake-cutting ceremony. In 2014, Taglyan Cultural Complex in Hollywood was honored to host the 239th birthday of the US Marine Corps and pay tribute to the brave men and women who defend our country. The black-tie event featured a formal dinner, stunning attire, solemn readings, and the pomp expected to follow “the most loyal, most feared, most revered, and most professional fighting force the world has ever known.”

The Continental Congress established the United States Marine Corps on November 10th, 1775, but it wasn’t until 1921 that Major General Commandant John A. Lejeune issued Marine Order No. 47 declaring November 10th as a Marine Holiday and setting the foundation for all Birthday Balls to come. In 1925, the first formal dance took place in Pennsylvania to honor the anniversary of the Corps’ founding, and a formalized cake-cutting ceremony – which mandates that the first piece of cake be presented to the oldest Marine present and the second piece to the youngest – and solemn reading of the Commandment’s Order No. 47 were added to the event over the years. Today, the look and atmosphere of annual function is much like the Marine Corps itself: efficient, polished, and professional.

The following message was prepared for United States Marine Corps Balls across the country. It was shown for the first time at Taglyan Complex: