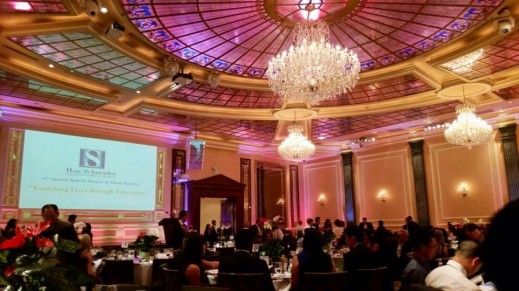 The 6th Annual Han-Schneider International Children’s Foundation (HSICF) Silent Auction and Benefit Dinner, which took place on October 24th at the Taglyan Cultural Complex in Hollywood was, once again, an overwhelming success. HSICF, a Christian charity that provides food, clothing, shelter, and medicine to orphaned children in third-world nations like North Korea, Tanzania, and Cambodia, has called the annual dinner at Taglyan its largest fundraising opportunity of the year; past events have raised $30,000 or more for the international charity, and judging from the capacity attendance and generous bids during the silent auction, last week’s semi-formal affair was no exception to this trend.

The theme of this year’s fundraiser, “Enriching Lives Through Education,” highlighted the importance of early-childhood education and development through an initiative called Operation B.O.O.K. – “Bringing Opportunity to Our Kids.” Along with delicious cuisine – which included hors d’oeuvres and a multi-course meal – representatives from HSICF elaborated on the charity’s mission and recounted heartfelt stories about children the charity serves around the world. Philanthropic actor Kevin John Peters, who has appeared on VH1 and is active in Los Angeles community programs like Big Brothers Big Sisters, emceed the evening’s events.

The following HSICF Introduction Video played for the first time at Taglyan: