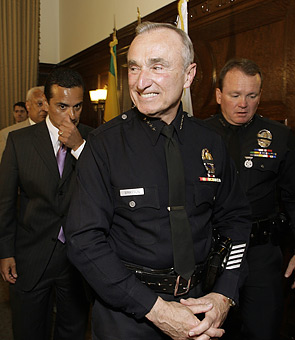 Under the auspices of His Eminence Archbishop Hovnan Derderian, Primate of the Western Diocese of the Armenian Church of North America, a reception was held in honor of Los Angeles Chief of Police William Bratton at the Taglyan Cultural Center, St. John Garabed Armenian Church in Hollywood on February 19th, 2008.

The reception afforded the leaders in the Armenian community a rare opportunity to express their heartfelt appreciation to Chief Bratton for his dedicated service to the Los Angeles community. Guests were welcomed by Lily Ring Balian, Chair of the Government Relations and Protocol Committee of the Western Diocese. In her opening remarks, she expressed her thanks to Chief Bratton for accepting the invitation, and for affording the Armenian community an opportunity to interact and share issues of mutual concern.

Archpriest Fr. Vartan Kasparian, who also serves as one of eight chaplains in the Visalia Police Department, offered the opening prayer. In his introduction of Chief Bratton, he reflected on the sacrifices made by the brave LAPD officers and reviewed the distinguished career of our esteemed guest.

In his remarks, Chief Bratton reviewed the goals, responsibilities, and duties of the Los Angeles Police Department, which is the third-largest police department in the United States. He praised the Armenian community as having strong faith, and a rich culture and heritage, with strong family values. He encouraged the Armenian youth to join the ranks of the LAPD—to bring their language and skills, strong family values, and their belief in democracy to the department.

Chief Bratton expressed how necessary and important these qualities are to the LAPD; how they will contribute to an effective fulfillment of its mission to serve the community of Los Angeles. He also introduced Deputy Chief Terry S. Hara, Commanding Officer of the West Bureau, to serve as a liaison with the Armenian community.

Deputy Chief Hara expressed his appreciation to the Armenian community for their interest and involvement. He also spoke about his hope for a constructive partnership with the community for the betterment of the quality of life in Los Angeles.

Joseph Kanimian, Esquire, Vice Chair of the Diocesan Council, praised Chief Bratton and the LAPD for their outstanding dedicated service to the community. On behalf of the Western Diocese, he presented Chief Bratton with a check in the amount of $3,000 for the Los Angeles Police Officers Memorial Fund.

In his closing remarks, His Eminence Archbishop Hovnan Derderian, Primate of the Western Diocese, expressed his high regard for Chief Bratton and the LAPD and commended them for their outstanding and unselfish service to the community. The Primate stated that this sharing of dialogue with Chief Bratton will contribute to a more expanded and closer cooperation between the Western Diocese and the LAPD for the benefit of the entire community.