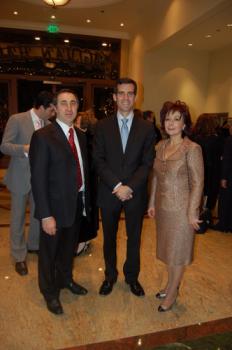 The Christmas season was off to a joyous beginning with the 4th Annual Christmas Celebration Banquet of the Western Diocese held on December 1, 2007 at the newly-opened Taglyan Cultural Center in Hollywood, California.

As in years past, three distinguished individuals were honored for their effective leadership and exceptional contributions to the life of our community. Receiving honors this year were the honorable Eric Garcetti, President of the Los Angeles City Council, and two well-known distinguished benefactors of the Armenian Church, Nishan Derderian and Armen Hampar.

This annual event had special significance this year, as it also celebrated the 50th birthday of His Eminence Archbishop Hovnan Derderian, Primate of the Western Diocese.

Guests received a booklet containing congratulatory messages from His Holiness Karekin ll, Catholicos and Supreme Patriarch of all Armenians, many high-ranking clergy, dignitaries, and government officials. The booklet also contained photographs depicting Archbishop Derderian’s childhood through his ordination into the priesthood, and his elevation into the ranks of Archbishop and Primate of the Dioceses of Canada and the Western United States.

Immediately upon arriving, approximately 400 guests were greeted by beautifully-decorated Christmas trees, both inside and outside of the Taglyan Complex, setting the tone for a festive and fun evening.

Mistress of Ceremonies Lily Balian introduced the first awardee, the honorable Eric Garcetti, commending him for his outstanding public service to the citizens of Los Angeles and his excellent support of the Armenian Community.

As a surprise to the two notable benefactors and recipients of the Philanthropist of the Year Award, Nishan Derderian was introduced by his son Mark Derderian, and Armen Hampar was introduced by his son Stephen Hampar. Both gave glowing and moving tributes to their fathers—not only as great humanitarians, but also as loving and devoted husbands, parents, and grandparents.

The Chair of the Christmas Celebration Committee presented the Primate with a special plaque and a beautiful banaga prepared and donated by Saro and Raffi Marukian brothers.

In his remarks, the Primate expressed his gratitude to the honorees for their love, exemplary leadership, and dedication to the Armenian Church and the Los Angeles Armenian community—that their vision and dedication in support of the community is truly a reflection of God’s will. He thanked the organizing committee for their hard work and dedication, and vowed to keep serving the Armenian Apostolic Church as its humble servant.

The remaining half of the evening proceeded with the joyful musical performance from Vatche and dancing. Santa Claus also made an early surprise visit to the 2007 Christmas Gala, exclaiming all his best wishes for a very Merry Christmas!