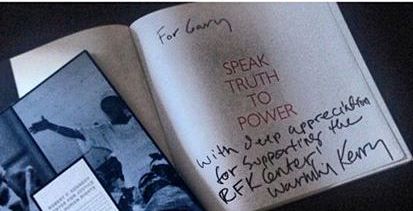 What a privilege and honor it was to be a part of the big movement of promoting and defending justice and human rights “Speak Truth to Power” this month. The event was hosted by Kerry Kennedy and the Robert F. Kennedy Center for Justice and Human Rights to educate and urge people to take a stance for the defense of justice and human rights internationally. Kerry Kennedy is the author of the book,  Speak Truth to Power: Human Rights Defenders Who Are Changing Our World , which includes examples of courageous people from all over the world who defend others in need through their actions such as the Dalia Lama, Archbishop Desmond Tutu, and Nelson Mandela to name a few. Kerry Kennedy spoke about her experiences in writing her book and how it felt to meet so many inspirational leaders from across the world.  Not only a book, the “Speak Truth to Power” is an initiative and has become also a website, play, documentary film, and a photography exhibition, in aiding to spread the awareness and urge people to take an action in defending justice and human rights for all countries.

This special event was at Max and Vicki Kennedy’s residence. Attendees of the event were all types of professionals from different industries including government officials like State Controller John Chiang , community leaders, celebrities, and human rights activists, like our own Gary Taglyan, who is a strong believer and supporter of justice and human rights for all people across the world. The night was a success with all the people who engaged with the belief in the movement of Speak Truth to Power and who contributed their time and effort, gave donations,  and who networked to spread the word about the ever-going global campaign of standing up for justice and human rights. We were also glad in helping putting the event together and provided hors d’oeuvres, desserts, and beverages for the night. Hors D’oeurves included caviar blini’s, tuna tartar, grapes divine, baby beet bops, prime beef skewers, wild mushroom truffle crostini’s, and our famous Dungeness crab cakes. Desserts included red wine infused pear mascarpone topped with 24kt gold leaves, flourless chocolate cake, and more. We are more than thrilled to have taken part of this event and are forever supporters in Speak Truth to Power and the movement for justice and human rights globally. And very special thanks to Kerry Kennedy for educating us on the global initiative of Speak Truth to Power and sharing her transformational experiences with us!