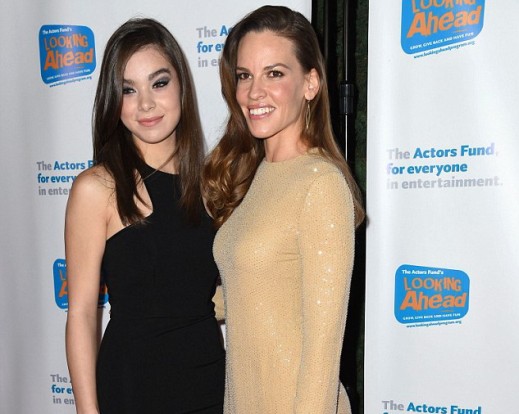 Academy-award winner Hilary Swank (Boys Don’t Cry, Million Dollar Baby) joined some of Hollywood’s most promising young stars at Taglyan Complex for the 2014 Actor’s Fund Looking Ahead Awards on Thursday, December 4th. In the spirit of the awards, which recognizes youth acting talent and fosters a positive community for child and teenage actors, Ms. Swank Hilary presented her mother Judy Kay Swank with the Looking Ahead Parenting Award for her sacrifices and dedication in helping Hilary become a successful actor. “She said, ‘Let’s go to Hollywood because that’s where you need to be if you want to see this dream realized,'” Ms. Swank told the audience during the ceremony, and described her mother as “my hero, my inspiration, my gift.”

She said, “Let’s go to Hollywood because that’s where you need to be if you want to see this dream realized.”

Created in 1882, The Actors Fund is a national human services organization that provides social services, emergency financial assistance, health care and insurance counseling, training services, and employment to professionals in the performing arts and entertainment industry. As a program within the Actor’s Fund organization, Looking Ahead was created in 2003 in partnership with SAG-AFTRA to help young actors between the ages of 9 and 18 develop the values, skills, and confidence they need to make successful transitions to fulfilling adult lives. Now serving more than 300 youths, their families, and alumni a year, the program aims to create a nurturing environment where young performers can grow through individual, family and education counseling, and by participating in leadership development training, community service, and social events.

At the time of publication, the Looking Ahead program had raised over $62,000 from the awards ceremony.