On Friday, February 24th, Taglyan Complex hosted the “Gospel Goes to Hollywood” Awards Luncheon to raise awareness and money for the fight against domestic violence. Hosted by actress Wendy Raquel Robinson and comedian Jonathan Slocumb, the event was considered a rousing success by those in attendance.

The day began with a red carpet reception on Taglyan’s courtyard, where guests received hors d’oeuvres and mimosas. Once inside, spectators marveled at the wonderful floral designs by Tic-Tock Couture Florals and feasted on succulent grilled salmon and filet mignon paired with baby Dutch potatoes, carrots, and asparagus.

Highlights of the event include stories of faith from honorees such as actress Loretta Devine, director Bill Duke, and producer Curtis King, as well as inspired performances from Donnie McClurkin and Angella Christie. Grammy winner CeCeWinans performed a tribute in Whitney Houston’s honor that brought tears to many eyes. 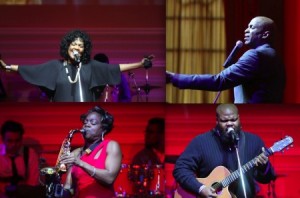 The luncheon was a significant success, and left attendees buzzing about next year’s event.